Museum of the Future: Dubai’s vision of a healthy planet

The torus-shaped museum is a design marvel that forgoes support columns, relying instead on a network of diagonal beams. It is enveloped in windows carved by Arabic calligraphy, adding another eye-popping design element to Dubai’s piercingly modern skyline that shimmers with the world’s tallest tower, the Burj Khalifa.

The Museum of the Future projects Dubai’s ambitions and its desire to be seen as a modern, inclusive city even as its political system remains rooted in hereditary rule and hard limits exist on the types of expression permitted. It is the latest in a stream of feats for Dubai, which is the first country in the Middle East to host the World’s Fair.

The museum envisions what the world could look like 50 years from today. It’s a vision that crystalizes the United Arab Emirates’ own 50-year transformation from a pearl-diving backwater to a global interconnected hub fueled by oil and gas wealth.

“It was an imperative requirement to develop so fast because we needed to catch up with the rest of the world,” said Sarah Al-Amiri, UAE minister of state for advanced technology and chair of the UAE Space Agency. “Prior to 1971, (we had) no basic road networks, no basic education, electricity network and so on.”

The UAE last year announced it would join a growing list of nations cutting greenhouse gas emissions, shifting away at least domestically from the fossil fuels that still drive the Arabian Peninsula’s growth, clout and influence.

However, the museum’s focus on a sustainable future brings to the forefront the inherent tension between the push by Gulf Arab states to keep pumping oil and gas and global pledges to cut down on carbon emissions, including the UAE’s 2050 net-zero pledge.

Moreover, the museum invites visitors to reconnect with their senses and disconnect from their phones, but digital screens and experiences flow throughout its installations. The museum also encourages visitors to think about the planet’s health and biodiversity in a city that celebrates consumption, luxury and consumerism.

Al-Amiri said the museum’s ethos is that the drive toward a sustainable future and healthy planet should not prohibit progress and economic growth.

“It needs to not be prohibitive, but rather an opportunity to create new opportunities out of this challenge that we’re all facing,” she said.

The museum’s creative director, Brendan McGetrick, said addressing climate change “doesn’t mean that you have to return to like some hunter gatherer lifestyle.”

“You can actually mobilize and continue progressing and continue innovating, but it should be done with an awareness of our relationship to the planet and that we have a lot of work to do,” he said.

The museum’s goal is to inspire people to think about what is possible and to channel that into real world action, he added.

Visitors to the Museum of the Future are ushered by an artificial intelligence guide named “Aya.” She beckons people to experience a future with flying taxis, windfarms and a world powered by a massive structure orbiting Earth that harnesses the sun’s energy and beams it to the moon. The so-called “Sol Project” imagines the moon covered by countless solar panels that direct that energy toward nodes on Earth, where humanity thrives and the planet’s biodiversity includes innovative plant species resistant to fire. 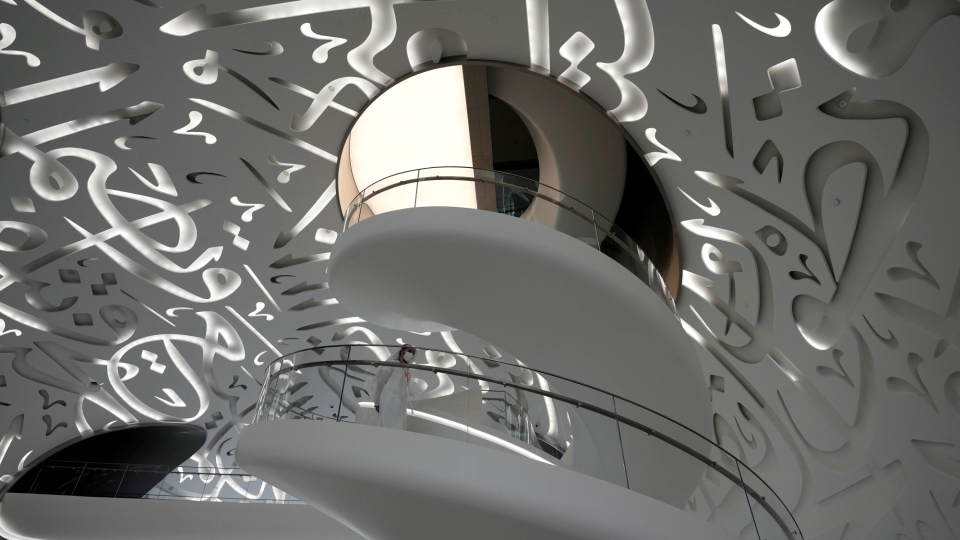 “What we tried to do is create a sort of compelling vision of what would happen if we imagine space as a shared resource,” McGetrick said.

The museum envisions that humanity’s collective energy project is directed by a space station called the OSS Hope, the same word in Arabic the UAE named its real-life mission gathering data from Mars’ atmosphere. Last year, the UAE became the first Arab country to launch a functioning interplanetary mission.

The museum’s imagined future also draws from Islam’s past with a mesmerizing display of the planets in our solar system mapped by astrolabes, the complex devices refined by Muslims during the Golden Age of Islam to aid in navigation, time and celestial mapping.

The museum’s Arab thumbprint flows throughout, including in a meditation space that is part of a larger sensory experience guided by vibration, light and water. These three elements underpinned life for tribes in the Arabian Peninsula.

The oil-fueled cities of the Gulf that have emerged from the desert over the past few decades unearthed seismic changes in the ways people in the region live, interact and connect with nature.

“It’s always important to continue to evolve and develop and understand what parts of the culture actually push development forward,” said Al-Amiri. “Creating new norms and new ways of living and new ways of coexisting is OK.”

A stunning centerpiece of the museum is a darkened mirrored space illuminated by columns of tiny glass cylinders with the illusory DNA of animals and species that have gone extinct, including the polar bear whose Arctic habitat is currently threatened by warming temperatures. In this dreamscape future, the health of the planet is monitored like a person’s pulse, temperature and vitals are.

The Museum of the Future opened to the public Friday with tickets costing the equivalent of $40 a person. An official launch ceremony Monday evening took place in the presence of Dubai ruler, Sheikh Mohammed bin Rashid Al Maktoum, whose poetry wraps the building in Arabic calligraphy.

The building was conceptualized by Killa Design, a UAE-based architecture firm. Killa Design says the building, which overlooks Dubai’s main thoroughfare, has achieved LEED Platinum status, a worldwide rating reserved for the world’s most energy-efficient and environmental designs.

Twitter unveils version of site that can bypass Russia block