Imagine for a moment running the Wangan at midnight, attacking the touge in autumn, or sliding through Nagano’s powdery snow banks… It all sounds idyllic, right? Those blissful moments are truly magic, but the reality of car ownership in Japan is actually a bit of a faff.

There are various ways the Japanese government has deterred car ownership to help keep traffic under control, and I’ll get to those in a bit.

Aside from that, there’s another teeny-weeny problem with car ownership here – the lack of physical space. So, when I was lucky enough to meet Takami-san and have a look through his collection, to see all his cars in all one place was impressive in its own right.

You might recognize these two kaido racers from a story I put together in January. Takami-san is the owner of the ‘garage’ we popped into briefly during the shoot, but as you’ll soon see, it’s actually more like a massive warehouse.

Obviously, if you own a car in Japan you’re going to need a place to keep it, and that can be a challenge in itself. But what if you own more than one, or even have a collection?

If you’re lucky enough to have a warehouse-like Takami-san does, then no problem. But I can assure you that this place is worth a small (or rather huge) fortune.

If not, then surely people could keep three or four cars on their driveway or their garage? Well no, because for most living in Japan’s big cities these things simply don’t exist.

Let me put it this way: Japan is full of beautiful, majestic mountains. In fact, there are so many mountains they account for 70% of the total landmass. That means that the remaining 30% of the total land area is populated by a staggering 93.5% of Japan’s population, which is currently around 125 million.

So you can imagine what the price of land is like here, and in turn how obscene it is to have space for three rotting classics to be chilling in the yard.

And we really are just getting started. In another corner of the yard, an original Corvette Stingray hints at the eclectic nature of Takami-san’s collection. The warehouse is in a semi-industrial area of Shizuoka Prefecture, which is by no means rural, but far enough away from Tokyo that these kinds of compounds are surprisingly plentiful (although still pricey).

From American muscle to German class, I suspect there is a little wheeling and dealing going on here, although I was told this is all strictly a hobby. I guess it’s a kind of ‘catch and release situation, for certain cars at least.

But with any collection, there are surely those cars that stay a little longer than others.

When I met Takami-san he was detailing this badass Nissan Cedric while his wife hosed down the AMG parked outside. With so many of the cars sporting number plates, I wondered who was going through the palaver and pain of shaken (roadworthiness and registration), insurance and parking licensing. These three necessary evils are a drain on the soul of any mere mortal with just one car in their name.

Of course, those are annual or bi-annual rituals that every car owner must endure in Japan but don’t forget the paperwork marathon which is the transfer of name required when buying a car.

This involves a trip to the local department of transport, endless form-filling, city stamp buying, and submission to multiple clerks for endless confirmations and carbon copying.

I suspect it’s a much more pleasant experience to just have this early-mid-’80s turbo Nissan Caravan as a sculpture, rather than go through the paperwork for it every year.

Most of the cars in Takami-san’s collection are unregistered, collecting dust quietly as they appreciate in value.

I’m not usually a fan of American classics, but this Impala Super Sport looked menacing in black and red. I dare say it’s on Takami-san’s ‘keep’ list, although I do wonder how you can even use something like this in Japan?!

As you’ve probably spotted by now, there are some real gems tucked away in the collection. The little red Datsun Sunny, the Impala SS, and the Cedric Brougham Turbo out front were all obviously eye-catching, but some are a little more subtle. Unless of course, you know what you’re looking at. 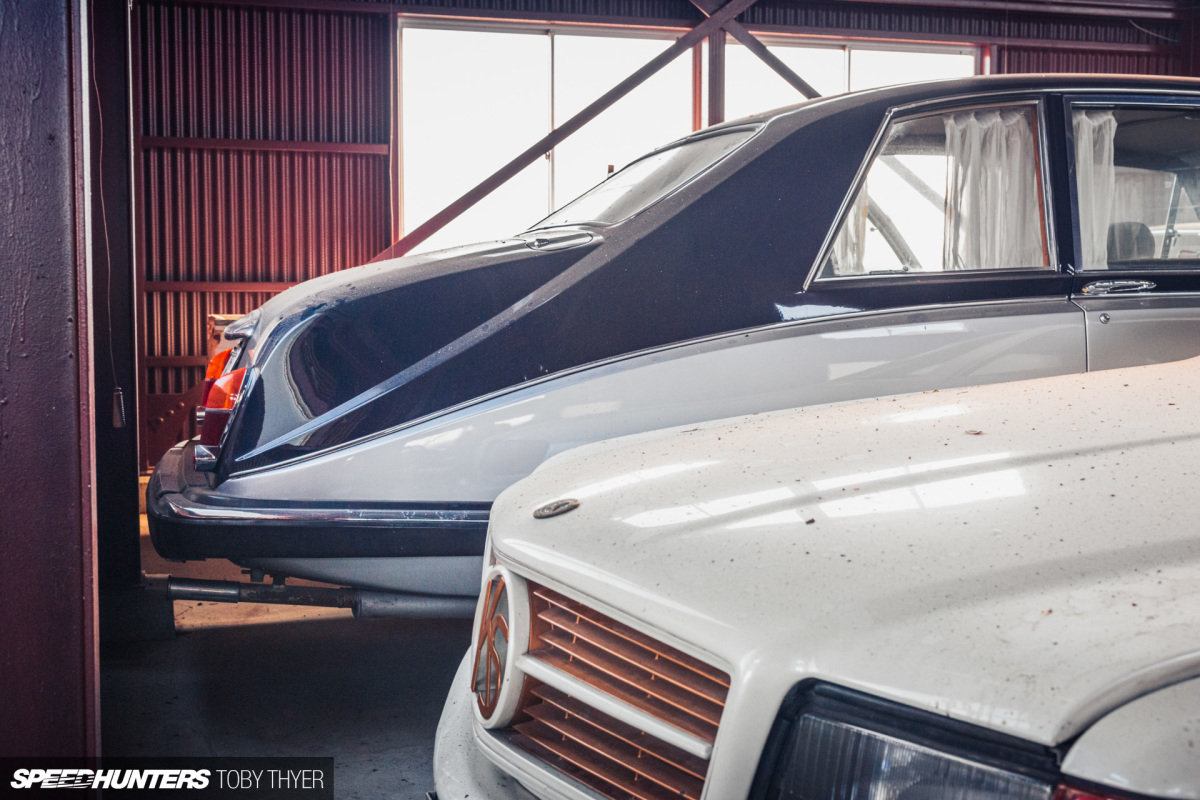 Luckily for me, while looking through my shots Mark spotted a super-rare Koenig Specials 500 SEC. This W126 is fitted with a Version II body kit, still available from the Koenig Specials website. It’s not quite as wild as the original kit, which utilises those iconic Testarossa-style fins in the flared rear, but extremely cool nonetheless.

Remember how I said the collection was a little manic? Nothing says ‘Merica more than a Harley-Davidson with a sidecar adorned with the bust of an eagle. I wonder if Takami-san has the leathers to go with it?

Sitting side by side were two cars I absolutely love – the Savanna RX-7 and an EMPI Imp. The Imp was one of many body kits available for the VW Beetle platform, based on the original Meyers Manx of 1964.

Are you keeping track of how many cars are in this collection? Would you be willing to spend an afternoon at the department of transport each time you bought a new one? Would you keep the insurance information up to date each year for every single car? Or would you pay someone to do all that for you?

Well, I have good news; this is Japan and there’s a service for just about anything you can imagine – especially buying, selling, and registering cars.

How’s this kaido racer-inspired RX-7? You might be happy to know that I’ll be heading back to Takami-san’s place to shoot it soon. But it’s not the only Mazda in the collection I’m interested in…

Restoring this Mazda Luce (aka RX-4) is something not even I would attempt in a driveway. This is where collecting cars, anywhere in the world, get serious. When you really start attacking them, then of course you’ll need a proper space to work in.

It’s a dream for most of us, especially in Japan where this kind of hobby is an alien concept to the general population. But for some, like Takami-san, this is how his life has played out. With a lot of hard work and a little bit (or a lot) of luck, he’s bringing some old heroes back to life and keeping them safe for generations to come.