Lincoln’s latest renaissance began with the Navigator, specifically the full redesign introduced four years ago. Offering far more power than the competition established a new, common concept of effortless performance throughout the Lincoln lineup, but it was the Navigator’s striking new interior design that really moved the needle and made people, including car reviewers like us, take notice. Subsequent Lincoln interiors evolved from that design and enjoyed similar praise, so it should come as no surprise that the updated 2022 Lincoln Navigator builds upon its trademark element.

Frankly, it’s unusual for interior design to so strongly embody a brand’s identity, yet a senior Lincoln official confirmed that’s exactly what the company sought to do with the Navigator and others. The exterior would be tidy and handsome, but to really stand out in a crowded luxury field, the brand chose to instead focus on creating a bold, unique interior. Clearly inspired by Lincoln’s midcentury glory years, but not attempting to copy it in chintzy plastic as Lincolns of the 2000s did, the Navigator cabin continues to look nothing like those of its competitors. It’s classy, it’s special and when done up in Black Label “themes,” it can be uniquely colorful as well.

For 2022, the most colorful of themes — “Destination” and its stem-to-stern coating of oxblood red — is discontinued. Boo. Apparently, it was popular in Lincoln’s top market of China. Less so in the United States, so it gets ousted in favor of the new “Central Park” theme shown here. The primary element is the “Urban Green” hue with leather perforations that form the outlines of a New Yorkesque skyline. It’s exclusively paired with stunning open-pore wood embossed, in gold no less, with a map of Manhattan’s grid and the titular Central Park. It’s a fitting alternative to the carryover themes of “Yacht Club” (the blue one) and “Chalet” (shades of brown and beige), plus the new “Invitation” theme that features black accented in a different gold-embossed wood for those who are less adventurous.

The interior’s only noteworthy aesthetic change for 2022 is also a functional one: the 10-inch touchscreen has been replaced by a 13.2-inch widescreen unit. It also runs Ford’s latest Sync 4 electronics interface, but it’s specially reskinned for Lincoln with a design dubbed “Constellation” that’s both a visual step up from Ford’s Sync 4 appearance as well as the outgoing Navigator interface that was really just a gray-colored version of Sync 3. Basically, the new touchscreen fits better with the rest of the cabin, while its widescreen orientation only enhances Sync 4’s general user friendliness. 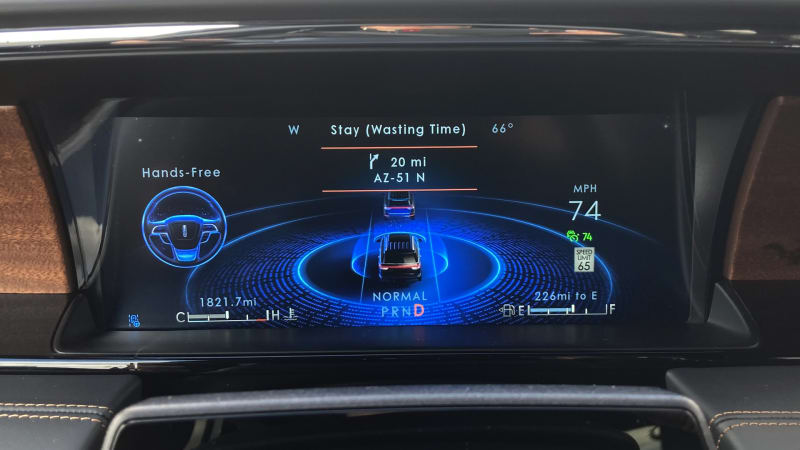 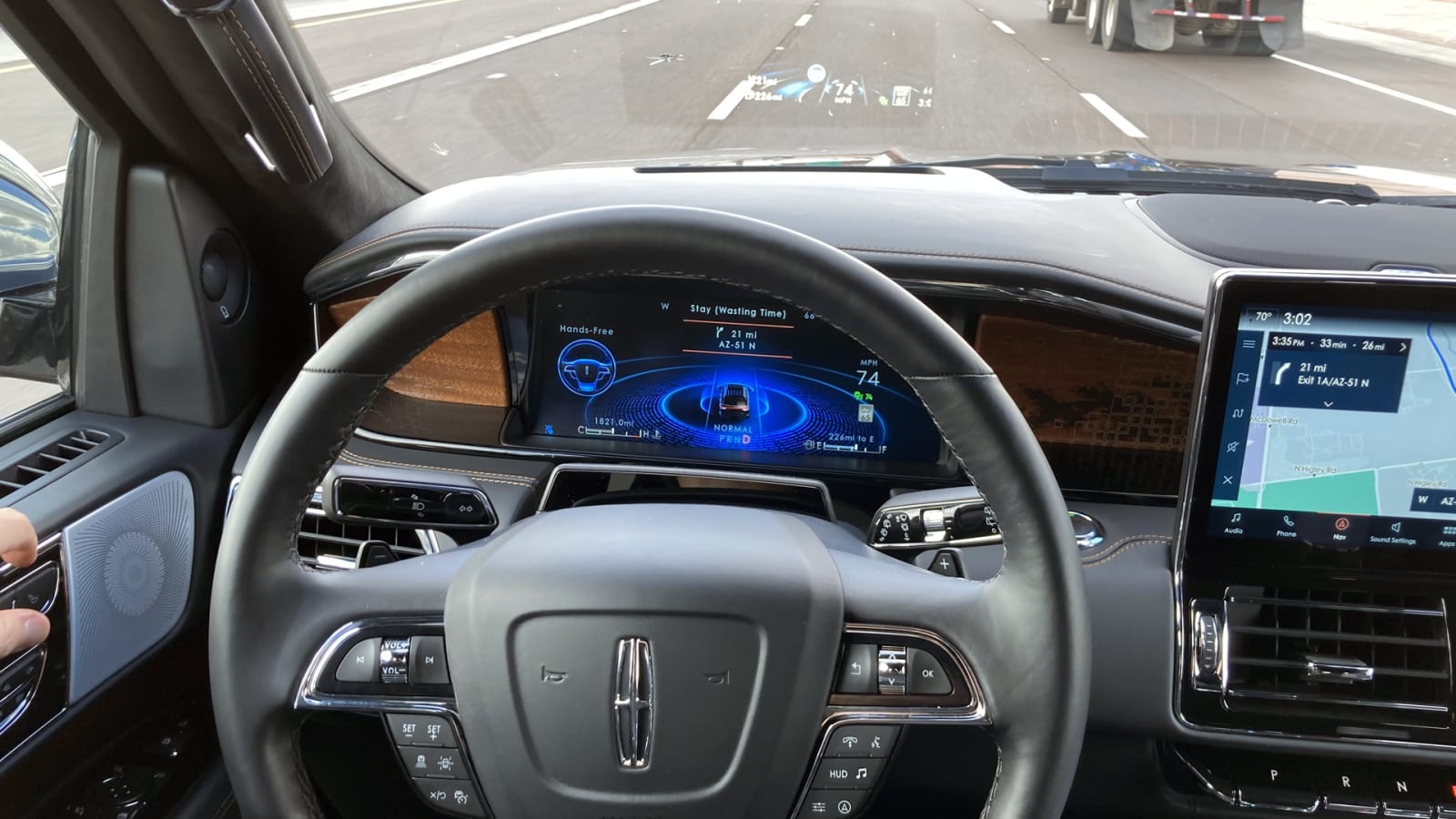 Another change you’ll notice is the unusual band of dark plastic atop the steering wheel in Reserve and Black Label trim levels. That’s the tell-tale sign of the new Lincoln ActiveGlide feature, which sounds like an enhancement to a Braun razor but is fact Ford’s BlueCruise handsfree driving system with a different name. The 2022 Navigator is the first Lincoln to get it. We go into greater detail about the system in our BlueCruise review, but in short, it allows for handsfree driving on limited access highways such as interstates. If there are intersections, as on Arizona Highway 87 where we drove the Navigator from Phoenix to Payson, it behaves like many advanced adaptive cruise control systems where the car handles the accelerator, brake and much of the steering, but you have to keep a hand on the wheel (let’s call this ACC mode). Unfortunately, the system is pretty lousy at actually detecting your hand – we repeatedly were told to put a hand on the wheel despite a hand totally being on the wheel. But it’s much better at detecting when your eyes aren’t on the road.

Being on a road capable of operating ActiveGlide was therefore appreciated, but the system would also cut out and revert to ACC mode without a consistent reason as to why the required ActiveGlide criteria were no longer met. GM’s SuperCruise would seem to be better in this regard. We will say, however, that ActiveGlide and its vibrant animations in the instrument panel (plus the redesigned head-up display) do a much better job of letting you know when the system is active than BlueCruise in the Mustang Mach-E.

Speaking of not driving, the back seat sees the other slate of noteworthy interior updates and upgrades for 2022. The captain’s chairs are heated and now ventilated as standard, and can be optioned up on Reserve and Black Label with massaging capability controlled by a new 5.8-inch touchscreen embedded within the fixed center console. Although second-row massage sounds fancy, it’s nowhere near as sophisticated and successful as the updated massaging function of the 30-way thrones up front. The second-row seats, by contrast, are effectively what you get in an Expedition with some extra air bladders. They’re pretty hard, a bit lumpy, and with the panoramic sunroof, taller occupants might find themselves uncomfortably close to the roof. The third-row carries over unchanged, and remains genuinely spacious and surprisingly comfortable for occupants of all sizes.

A more successful backseat update is the new rear-seat entertainment system, or Lincoln Play, which features two touchscreens running Amazon’s Fire TV. Besides the various streaming entertainment options, Prime Video content can be downloaded ahead of time. You can even control and monitor Alexa Smart Home functions, including thermostats, cameras and locks. All of this will make it much easier to buy some toilet paper from the back seat of your Navigator and watch it be delivered at your front door. The future is here, people. 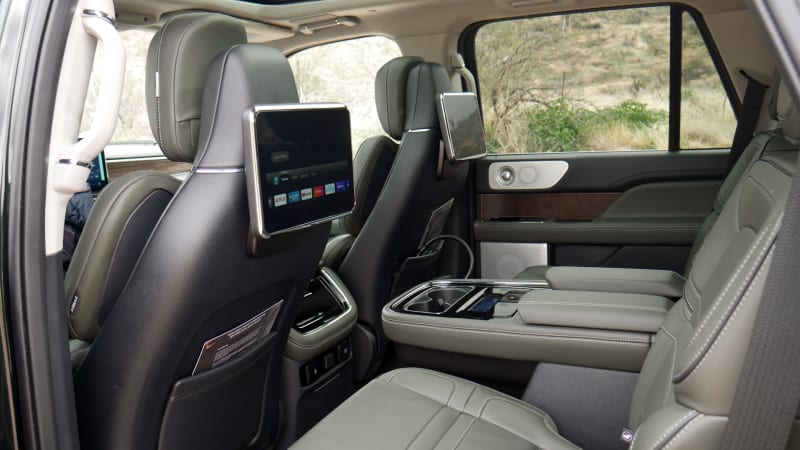 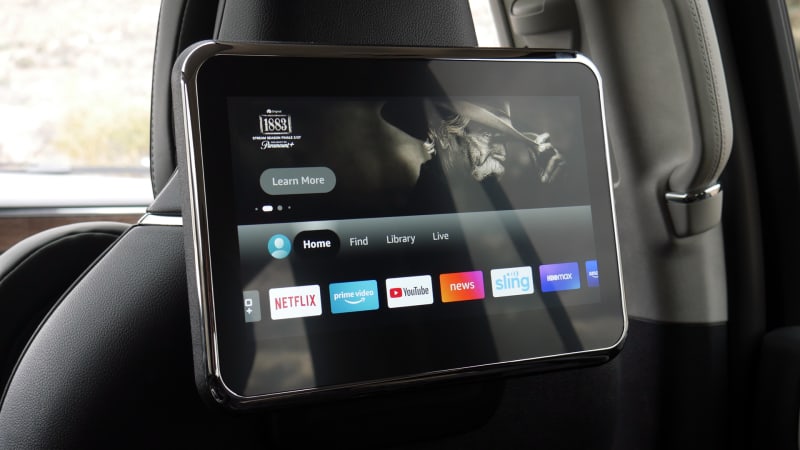 While the interior upgrades rightly get most of the attention for 2022, there are subtle exterior design changes as well. The headlights are a little narrower with redesigned LED elements, and the outer grille surround has been extended lower into the air dam. The Black Label, pictured above, also gets a new, unique grille insert. The rear gets more attention as Lincoln noted that customers wanted a more visually interesting taillight arrangement, and we can’t blame ‘em. Although not radically different, the entire horizontal arrangement of lights and trim is thinner and features three-dimensional contours rather than being flush-mounted to the liftgate. It’s more like the Aviator now, which is a good thing.

And finally, there are indeed some mechanical upgrades for 2022. The standard adaptive suspension gains camera-based road-preview technology, a rare feature also offered by upper-crust Mercedes and BMW sedans, plus the Genesis GV80. Effectively, the suspension prepares itself in advance to best deal with unpleasant pavement in addition to reacting to it. While we could not drive ’21 and ’22 Navigators back-to-back to detect differences, the ride is indeed properly plush without exhibiting the sort of head-bobbing movements of the softly sprung Jeep Grand Wagoneer. We can’t say we noticed much in the way of the suspension tightening up when in the “Excite” sport mode, nor an appreciable uptick in steering heft, but this is a 6,000-pound full-size SUV. Who cares? The bigger concern is the wiggling and jiggling you get over bigger bumps despite the advanced suspension’s best efforts – the Navigator is still a body-on-frame, truck-based SUV, and you can’t escape the inherent dynamic flaws that entails. Is it better or worse than the Grand Wagoneer or Cadillac Escalade in this regard? We’d need a back-to-back drive to answer that, but you definitely won’t get such uncouth body responses in a Mercedes GLS, BMW X7 or Range Rover. 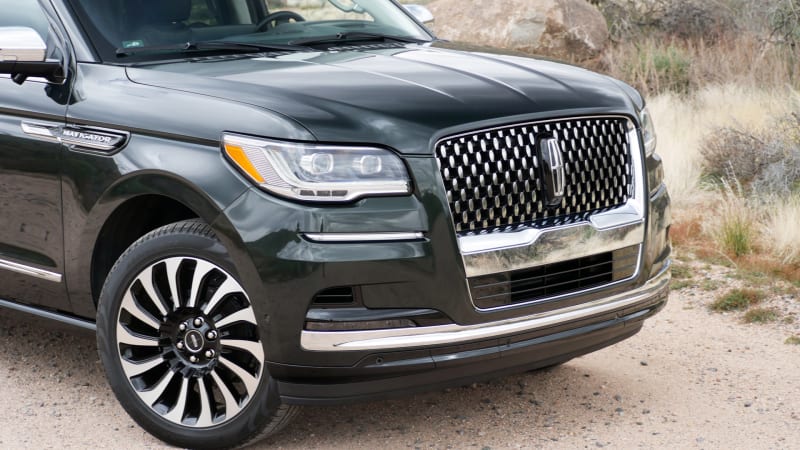 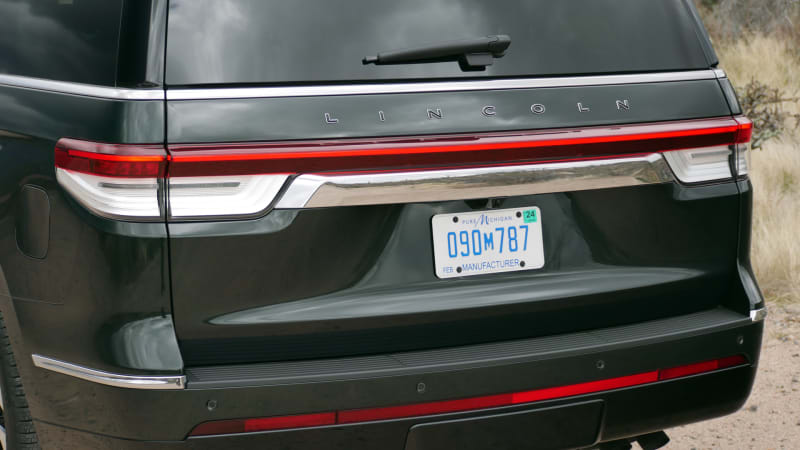 The Navigator’s version of Ford’s 3.5-liter turbocharged V6 now produces 440 horsepower, which is actually down 10 hp from last year, and the same 510 pound-feet of torque. There’s a higher compression ratio for 2022 with the goal being improved efficiency, and there are indeed gains. A 4×4 Navigator returns 16 mpg city, 22 mpg highway and 18 mpg combined, up from 16/20/17. That may not seem like a lot, but when you’re talking big SUVs and such low mpg figures, it actually makes a difference. According to the EPA, you can save $1,000 per year on gas by choosing the Navigator over an Escalade with its 6.2-liter V8. The Grand Wagoneer is even worse. Yes, these are $100,000 SUVs we’re talking about, and we’ll let you decide if $1,000 really matters, but the Navigator’s turbo V6 is also considerably more powerful than the Escalade’s V8. This quiet, buttery smooth engine is a perfect pairing for Lincoln’s luxury vibe. And sure, the Escalade’s optional diesel engine is thriftier still, but when it comes to a balance of power, efficiency and refinement, the Lincoln V6 has to be considered the segment’s best. Now, if only Ford/Lincoln could find a way to fit the F-150’s PowerBoost hybrid powertrain into the Navigator …

Certainly, the game has changed since 2018 when the Navigator and that eye-opening interior debuted. The Escalade has been completely redesigned and the Grand Wagoneer introduced – both with leather-lined, feature-packed and technology-focused cabins to rival the Navigator. Style is forever subjective, but we say the Navigator cabin still has an advantage, especially when comparing Black Label to its rivals’ top trim levels. Everything about it still looks special, while the new tech upgrades at least help the Navigator remain competitive with Cadillac’s vast OLED curved displays and Jeep’s multitude of screens. The Grand Wagoneer also has no answer to ActiveGlide, unlike the Escalade and Super Cruise.

Therefore, if the interior remains the Navigator’s trademark while the rest of the package remains class-leading or at least competitive, it’s easy to conclude that it’s once again the segment’s best. The renaissance continues.