SAUGATUCK, Mich. — We almost didn’t take it. The 2022 Infiniti QX55 wasn’t our first choice for a long weekend getaway to the frozen shores of Lake Michigan. No slight against this stylish crossover — it’s just not all that big. Especially for two adults, a preschooler, a golden retriever and all of the things needed for a winter vacation. The night before we left, in the drive-through line at Culver’s, we decided: “Hey this thing is really nice. Let’s hope everything fits.”

More important decisions have been made with less thought, so the next morning I began packing the QX55. With 26.9 cubic feet, there’s actually more cargo space than coupe-styled crossovers like the 2022 Audi Q5 Sportback, Mercedes GLC Coupe and BMW X4. Still, the graceful rooflines limit storage capacity for all of these. In my mind, they’re more commuter crossovers. If you need real space, you would opt for the more upright QX50 and its 31.4 cubic feet of cargo room.

But what the hell is a cubic foot, really? Trunks and cargo areas are often as much about shape as they are about raw volume, and the QX55 turned out to be surprisingly roomy. I wedged a large Samsonite carry-on (19 inches long, 13.5 inches wide), a massive duffle bag, a box of food and stuff, a case of beer, a sled and a few other things, plus two heavy winter parkas laid over the top. For the return trip, we wedged even more stuff in there, including a trash bag filled with laundry and beer from the local brewing scene. On the way there, I could see out the back. On the way home, not so much. For more adventures in loading up the QX55, check out this luggage test.

That’s the tradeoff and something you’ll want to consider if you’re buying something like the QX55. You need to really like the styling, and this segment includes lookers like the X4, which are more compelling visually than their boxier brethren. The QX55 shares Infiniti’s variable compression turbo, which makes 268 hp and 280 lb-ft of torque, so there’s no compelling powertrain reason to seek out the coupe version. Even though the 55 is more rigid than the 50, you’d really need to be an engineer to notice the difference.

The steering is light and the suspension is tuned for comfort. If you’re looking for a driver, consider any of the German competitors first, though the VC turbo is an interesting engine that has some heart. Infiniti invested in this technology and deserves credit for using it across its lineup to deliver performance and respectable fuel economy (25 mpg combined). The CVT, unfortunately, numbs the potential of the powerplant, as we noted in our First Drive review last year.

As far as a road-trip vehicle, the QX55 is a mixed bag. It’s louder at highway speeds than I expected, and the snow and then rain made things worse. The cruise control systems worked well, maintaining distance and speed, though the lane departure prevention was overactive to the point of annoyance. The black and gray interior is attractive and has a leather-wrapped steering wheel and seats. The 16-speaker Bose system sounds great and the cabin has an upscale vibe. That said, the “Infiniti InTouch Dual HD Display” and the navigation system were challenging to use and struggled to find basic locations, like landmark parks and restaurants. We got the hang of it eventually and it’s about average. Outside of intuitive systems like Stellantis’ Unconnect, it’s often easier to use your phone for in-car navigation, and Infiniti’s falls into that category. 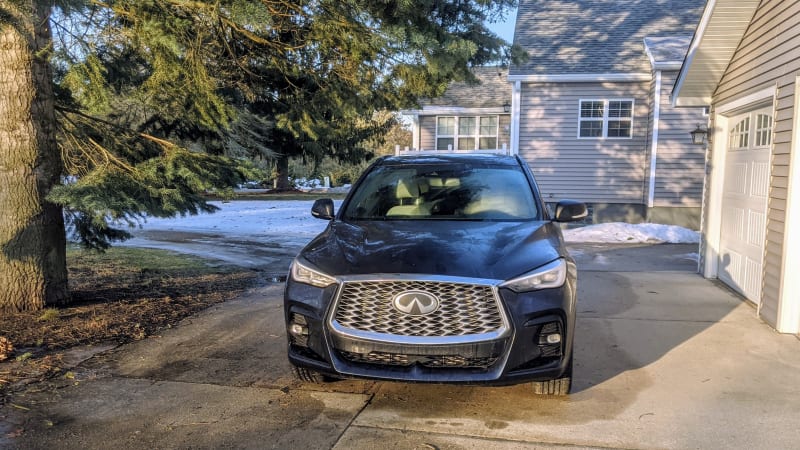 My tester cost $53,425 in the mid-level Essential trim (learn more about the QX55 lineup in our 2022 Buying Guide). It’s a good value, especially compared to the segment. The price includes the $800 proassist package (LED headlights, intelligent cruise control and the lane departure systems) and destination charges.

Infiniti compares the QX55 to the much-lauded FX crossover from a decade ago. With potent powertrains and dramatic styling, the FX was ahead of its time. The QX55 is merely in step with the market. It is a good value and looks sharp. As we’ve discussed in previous reviews, it falls in the middle-of-the-pack in a competitive segment. But we already knew that. The question posed here is: can you take an attractive commuter crossover and put it to use as a weekend warrior for the family? Naturally, it’s doable. I’ve camped in a Chevy Tahoe and spent a week in the Upper Peninsula in a Mk 7 Volkswagen Golf GTI, so I’ve lived at both ends of the spectrum. Still, the QX55 was reasonably up to the task of transporting people and stuff (and one very large-breed dog) on a 400-plus mile roundtrip. It’s making me slightly rethink the notion of the commuter crossover.